agree to set up

The People's Government of Guangxi Zhuang Autonomous Region and the National Development and Reform Commission:

The "National Development and Reform Commission's Request for Approving the Establishment of Guangxi Baise Key Development and Opening-up Pilot Zone" (Fa Kaikai [2019] No. 2043) has been received. The approval is as follows:

1. It is agreed to establish the Guangxi Baise Key Development and Opening-up Pilot Zone (hereinafter referred to as the pilot zone), and the implementation plan for the construction of the pilot zone shall be issued by the National Development and Reform Commission. The pilot area is located in the west of Guangxi Zhuang Autonomous Region, bordering Vietnam, and is an important frontier of my country's opening-up and cooperation with ASEAN. The construction of the pilot zone is an important measure to promote the joint construction of the "Belt and Road", accelerate the pace of development and opening up along the border, and build a new pattern of comprehensive opening up. Corridor; conducive to the formation of a new growth pole in the southwest region, promoting the formation of a new pattern in the development of the western region; conducive to winning the battle against poverty in an all-round way, and accelerating the revitalization and development of the old revolutionary areas in the left and right rivers; conducive to accelerating the urban and rural construction in the border areas, and promoting the stability of the border and the prosperity of the border. side.

2. The construction of the pilot area should be guided by Xi Jinping Thought on Socialism with Chinese Characteristics for a New Era, fully implement the spirit of the 19th National Congress of the Communist Party of China and the Second, Third, and Fourth Plenary Sessions of the 19th Central Committee, and earnestly implement the "Three Three Major" entrusted by General Secretary Xi Jinping to Guangxi. Positioning" new mission and "five solid" new requirements, in accordance with the decision and deployment of the Party Central Committee and the State Council, adhere to the party's overall leadership, adhere to the people-centered development philosophy, adhere to the new development concept, and give full play to the experiment in accordance with the requirements of high-quality development The region has unique advantages in cooperation with ASEAN, especially with Vietnam, promote institutional innovation, improve the level of infrastructure interconnection, promote in-depth industrial open cooperation, build a high-quality open economic system along the border, fully promote poverty alleviation and rural revitalization, and promote border areas. Prosperity and development, strengthen ecological and environmental protection restoration and cross-border cooperation, carry out cultural exchanges and cooperation, and strive to build the pilot zone into an important platform for China and ASEAN to jointly build the "Belt and Road" with high quality The Anbian Xingbian model area and the ecological civilization construction demonstration area have made new important contributions to the construction of a new pattern of comprehensive opening up.

"The key word of the pilot zone is 'trial'. The fundamental purpose of building the pilot zone is to explore new ways and accumulate new experience for the border areas to comprehensively deepen reform and expand opening up."

On August 12, 2016, the State Council agreed to establish the Pingxiang Key Development and Opening-up Pilot Zone. 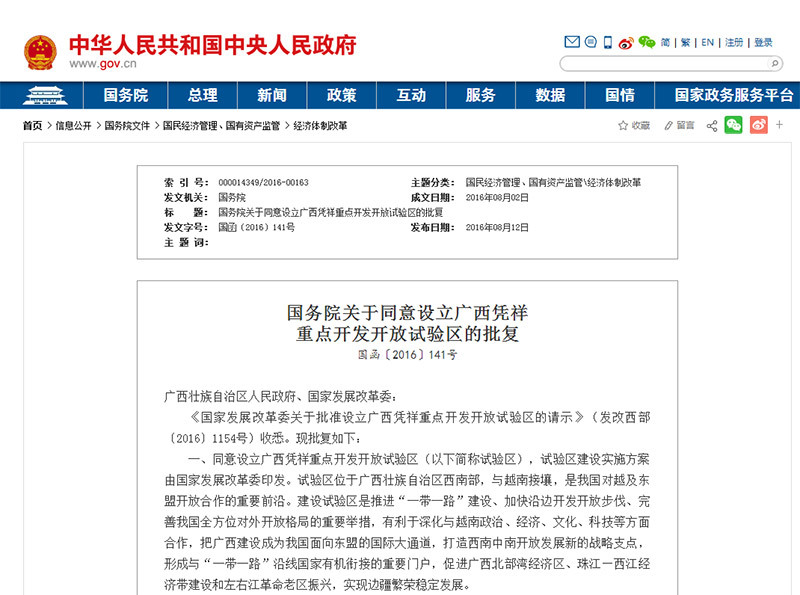 ▲In 2016, the State Council approved the establishment of a key development and opening-up pilot zone in Pingxiang, Guangxi.

According to People's Daily Online:

The meeting pointed out that over the years, the construction of the pilot area has been advanced in an orderly manner, and important progress and obvious results have been achieved.

The comprehensive economic strength of the pilot area has been greatly improved, changing the backward situation of being located in the lower reaches of the province for a long time in the past, and becoming a growth pole for the development of border areas;

The function of an international major channel hub has basically been formed. The construction of the China-Laos Railway and the West Line of the Trans-Asian Railway has started, and a number of key projects such as the Nanning-Fangchenggang High-speed Railway, the Ruili-Longchuan Expressway, the China-Vietnam Beilun River Second Bridge, and the Suifenhe-Dongning Airport have been completed. Put into use;

The urbanization construction has achieved outstanding results. In 2018, the total permanent resident population of the pilot area increased by 6% compared with the previous year, and the total registered population increased by 10%, and the population agglomeration capacity has been strengthened against the trend;

The role of the people-to-people connection window has been continuously strengthened, and an important platform for the joint construction of the "Belt and Road" has been established and neighbors have been harmonious, safe and prosperous;

The reform of key links in key areas has been continuously deepened, and a number of replicable and scalable experiences have been accumulated in international trade, cross-border finance, and labor cooperation.

The meeting believed that in the next step, the construction of the pilot zone should adhere to the combination of institutional innovation and technological innovation, and play a greater role in promoting the construction of the "Belt and Road" and the overall situation of national reform and development. First, it is necessary to emancipate the mind, change the concept, enhance the initiative and creativity of the construction of the pilot area, and explore new ways of opening up and developing in the border areas. Second, we must be open, inclusive, cooperative and shared, adhere to the principle of extensive consultation, joint contribution and shared benefits, and implement various requirements for promoting the high-quality development of the "Belt and Road" construction. Third, we must focus on key points, pay close attention to implementation, strengthen infrastructure construction, and strive to build international comprehensive transportation channels oriented to Southeast Asia, South Asia, Central Asia, and Northeast Asia; vigorously develop characteristic and advantageous industries, and promote the transformation and upgrading of the industrial system in border areas. Fourth, we must first try, develop and innovate, and use institutional and mechanism innovation as the driving force to build an institutional system for the development and opening up of border areas, and form more replicable and popularized experience. Fifth, to expand channels and form synergies, take people-to-people and cultural exchanges as an entry point, comprehensively strengthen exchanges and cooperation in education, health, culture, tourism, environmental protection and other fields, and consolidate the people's foundation for foreign cooperation.

Since 2012, China has successively established seven key development and opening-up pilot zones in the border areas, namely Dongxing in Guangxi, Mengla (Mohan) in Yunnan, Ruili in Yunnan, Erenhot in Inner Mongolia, Manzhouli in Inner Mongolia, Suifenhe-Dongning in Heilongjiang, and Pingxiang in Guangxi. The construction of the aforementioned pilot zone is an important measure to promote the construction of the "Belt and Road" and improve the new pattern of China's comprehensive opening up.

[Policy] The latest news from the National Development and Reform Commission! The overall plan for the new western land-sea passage is released: an international gateway port in the Beibu Gulf of Guangxi will be built!